As its very obvious title suggests, Baywatch is loosely (very loosely) based on the popular 90’s television series. It stars Dwayne Johnson as Mitch Buchannon, the beloved leader of Baywatch’s lifeguard team. Aside from frequent drowning beach goers and the odd purse snatching, all is well in the land of lifeguards. That is until financially troubled ex-Olympian Matt Brody (Zac Efron) joins the team as part of his community service bid. His douchebag demeanour and complete disregard for rules provoke his team to take an instant disliking to him. Mitch in particular doesn’t care for Brody or his dip-dyed hair but when drugs and accompanying dead bodies start cropping up near the beach, he realises they have bigger fish to fry. The fish, being the beautiful Priyanka Chopra, who plays Victoria, a drug kingpin working under the guise of the town’s new country club owner. Mitch and his team suspect that she is behind everything but as lowly lifeguards with no real jurisdiction, they’re forced to go undercover to prove it, all the while trying not to kill Brody in the process. 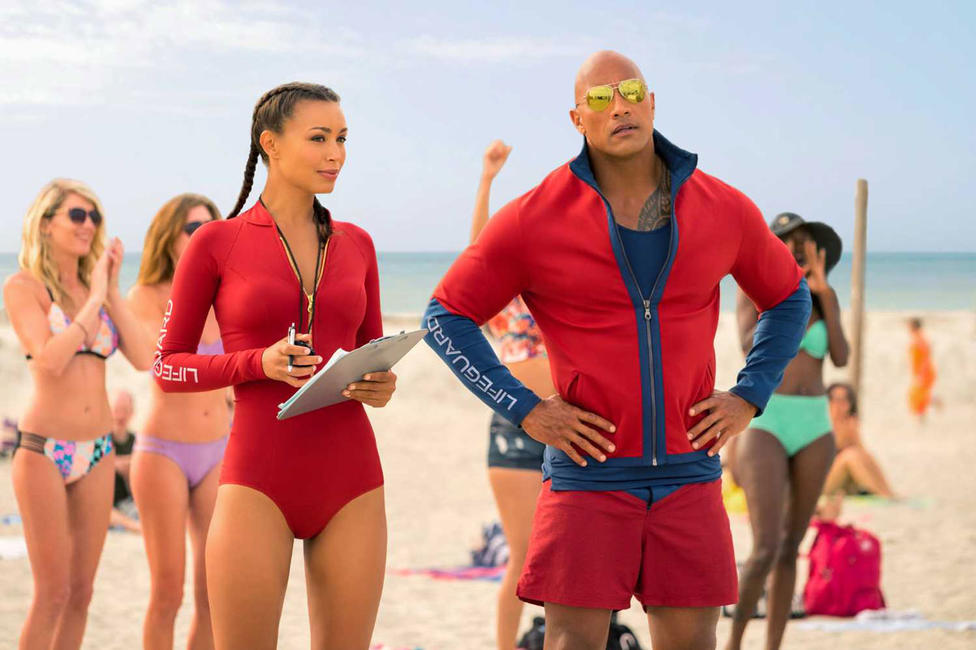 To describe this film as ‘appalling’ would be to compliment it. Is it a comedy? Is it an action flick? It’s none of the above. It’s a poorly written and directed parody film; at least, it has to be, because if not it’s the biggest waste of $65 million since the making of Ben Affleck’s Live by Night. From its crude jokes to its lack of humour and originality, this film could be marketed as a Baywatch spoof and nobody would bat an eyelid. Baywatch fans prepare for disappointment.

It’s only right they pay homage to the TV series from the get-go, and so director Seth Gordon subjects us to an uncomfortably long and dramatic opening scene in which it’s made insultingly obvious that the film is set on a beach. That’s about as many references to the original the film makes. It’s hard to understand why this two hour debacle has been labelled a film adaptation of the TV series. There are a couple meta-references here and there but the film deviates so far from its source material that the only similarity between the original and this mess are the characters’ names. 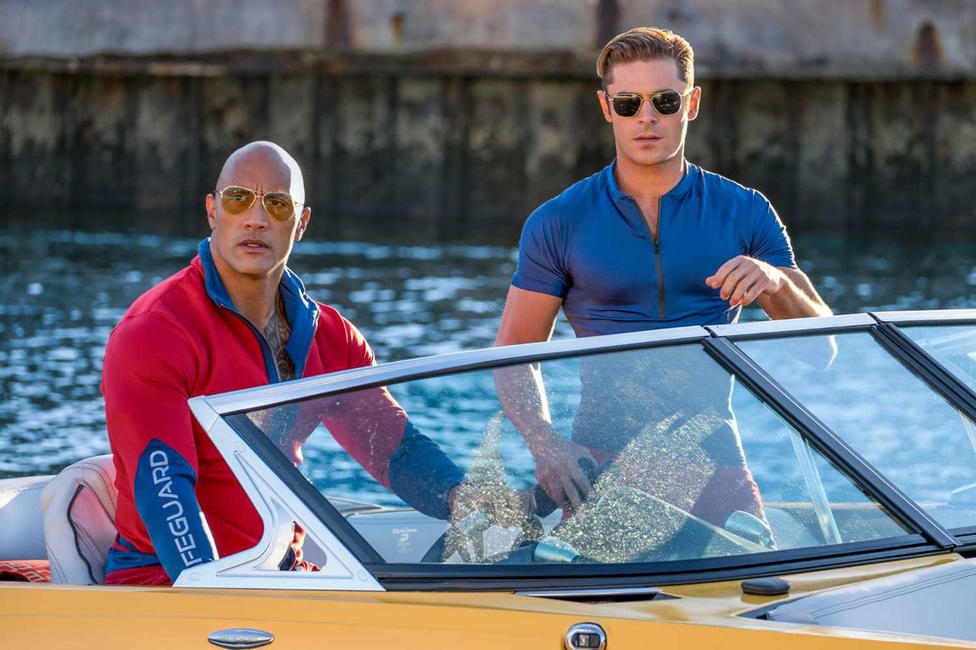 The very few things in this film worth complimenting, e.g. the ethnically diverse cast, are overshadowed by the foolishness that occurs throughout the film. Seth Gordon’s frantic camerawork only adds to the chaos as does the careless editing. The overly dramatic soundtrack attempts to heighten the tone of each scene to unprecedented levels. It’s about as subtle as a jumbo jet. It’s hard to put into words just how atrocious it all is. It starts off like it’s a Mitch Buchannon TV special, which I imagine would be aptly named something like Mitchy B’s Baywatch Adventures. He’s introduced to us like some kind of demigod as he runs along the beach and does his rounds. ‘He’s a damn county lifeguard,’ shouts community police officer Garner Ellerbee. That’s exactly what he is Garner, so why he’s treated like King of the Sea by the local folk baffled me too. 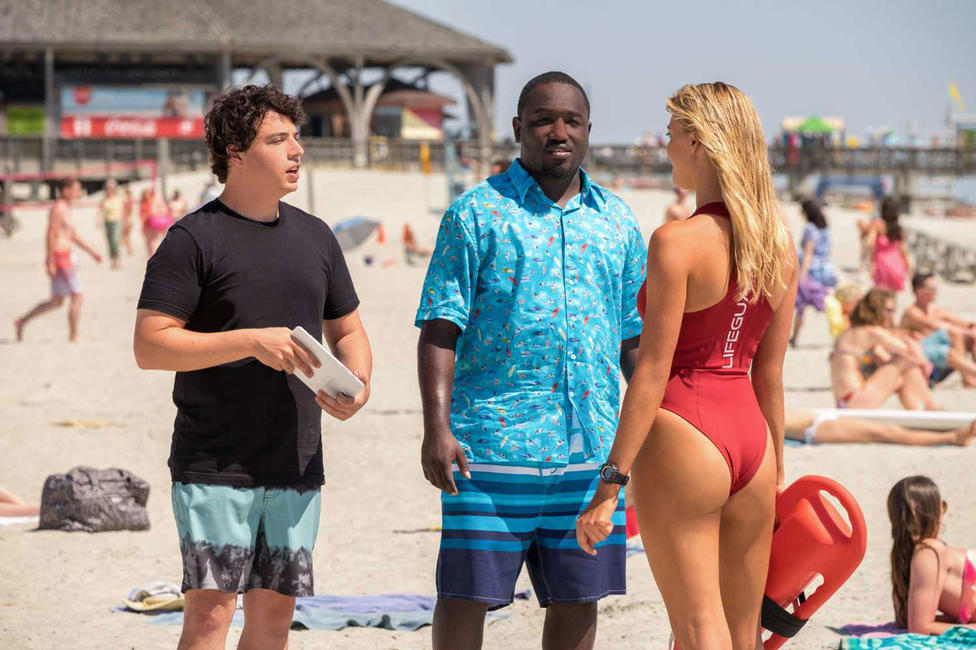 What’s even more baffling is how scriptwriting duo Damian Shannon and Mark Swift convinced the cast that this screenplay was comedy gold. Much like the programme Geordie Shore, this film contains strong language and sexual references from the outset and throughout. The difference here is that the crude jokes are bad and the cast’s delivery is even worse. To say their comedic timing is off would be to imply that there’s a joke in the first place. The script is bland and full of tired, penis jokes from beginning to end. Ronnie (played by newcomer Jon Bass) gets his penis stuck in the slats of a sun lounger. Of course the chubby guy is the butt of the joke. This grotesque humour continues throughout the film, this includes when Brody and Mitch break into a morgue and argue over who has to check a dead man’s scrotum for evidence. When they do decide, we’re not spared the view. It’s an image that cannot be unseen. At least the original Baywatch pretended it was subtle with its very obvious sexual innuendos. This one just encourages necrophilia.

The two people cast to get bums into cinema seats will probably be the very same thing that drives people away. Johnson and Efron are an odd pairing and this is probably Efron’s worse performance to date. Malibu Ken, Jonas brother, High School Musical, Hot Wheels- these are just some of the nicknames Buchannon gives Brody but none them are funny enough to generate even a snigger. Their tit for tat is more like twit for twat, with their insults becoming more outlandish and nonsensical the longer their exchanges continue. There’s a scene in which the team rescue some women stranded on a boat engulfed in flames. The special effects are so bad they could honestly be confused with Sharknado. At one point Brody says ‘that sounds cheesy’. Yes Brody, that’s exactly what this is. Of course the TV show was cheesy, but it was the good kind of cheese, like a fancy fondue at a nice restaurant. This film is the bad kind of cheese, the foul smelling, own-brand one in the reduced section of the Supermarket. 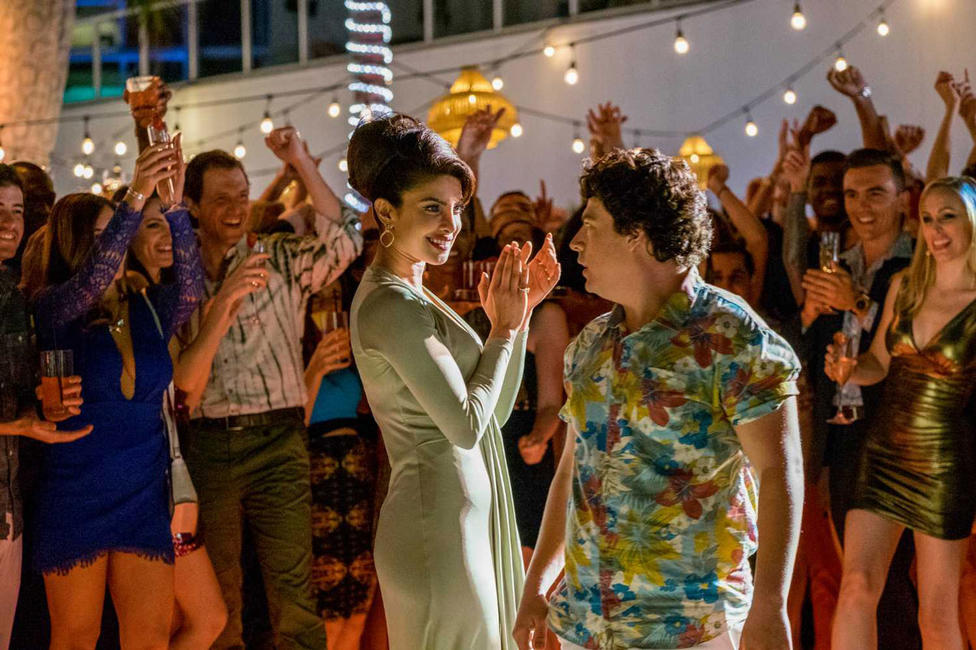 There isn’t really anything positive thing to say about this film. It isn’t funny, there aren’t any ‘ones to watch’ and there’s isn’t a breakout star. The closest we get to that is Priyanka Chopra and even that’s a bit of a stretch considering her success in Indian cinema. She’s good but not exceptional and her role feels a bit chunkily written into the script. Aside from having a flawless American accent, the Indian born actress doesn’t add much to the film. It wouldn’t be a Baywatch film without the original Mitch Buchannon and CJ Parker. Hasselhoff and Anderson make a quick appearance but they’re cameos are as pointless as this film.

BAYWATCH IS OUT ON THE 29TH OF MAY IN CINEMAS NATIONWIDE.

CATCH MIDNIGHT SCREENINGS ON THE 28TH OF MAY IN PARTICIPATING  CINEMAS.

One thought on “Baywatch Review”