Hacksaw Ridge is a biographical war-drama, based on devout Christian combat medic Desmond Doss. You might ask: ‘Who is Desmond Doss?’After watching this film, you’ll be unlikely to forget anytime soon. Director Mel Gibson splits the film into two very different halves. The first depicts Doss’s religious upbringing in Virginia, his difficult start in the army and the lead up to his celebrated efforts on Hacksaw Ridge. The second depicts Doss’s incredibly brave and exhaustive efforts to save his fellow soldiers during the famous 1945 Battle of Okinawa. 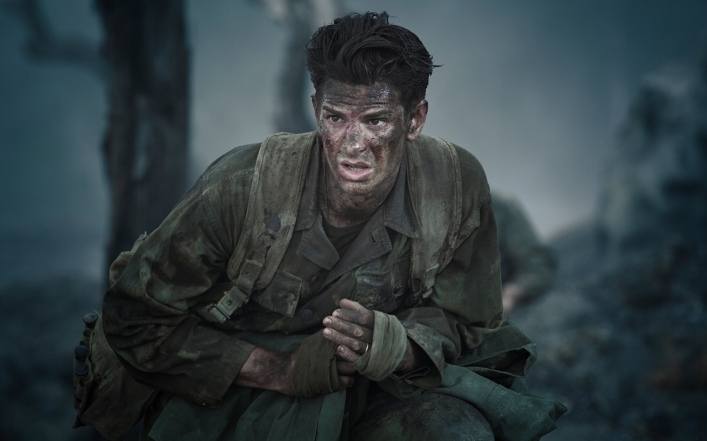 The film starts with Desmond as a young boy growing up in Lynchburg, Virginia. He gets into a fight with his brother and hits him round the head with a brick, nearly killing him. He’s horrified with his actions and being from a deeply religious family, he is firmly reminded of the 10 Commandments- in particular Thou Shalt Not Kill. We next see him as a young adult (played by Andrew Garfield). He meets and subsequently falls in love with Dorothy, an outspoken phlebotomist (Teresa Palmer) and decides to join the army. Still a believer in non-violence, he signs up as a combat medic, not a soldier. His veteran father (Hugo Wavering) is appalled with his son’s decision to join. He’s still haunted by the lives lost during his time in combat and as a result has become an abusive alcoholic, albeit not a very convincing one. Is his speech slow and slurred? Yep. Does he have bloodshot eyes and a face sheen of sweat? Yep. Does he turn a deep shade of red in drunken fits of rage? Yep. Hugo Wavering displays all the attributes of an alcoholic but that’s just not enough to make his performance convincing. If anything, it’s too much. His acting is so over the top that he might as well go all out and start dribbling while rocking back and forth in a corner; because that’s all his performance was  missing.

After he refuses to hold a rifle due to his pacifism, Doss’s decision to join the army is equally ridiculed at training camp. The actors portraying Doss’s commanding officers do little to make their characters come alive. Vince Vaughan plays Sergeant Howell; Doss’s steely eyed superior. He flies out insults with great comedic timing but the rest of Vince’s performance falls flat. The same goes for Sam Worthington who plays Captain Glover- a man intent on kicking Doss out the army. The only emotion Sam displays is anger and he does it very poorly. As a consequence, their characters remain very one dimensional and are hard to take seriously.

Of course bad casting can’t solely be to blame for the film’s very rocky first half. By very rocky, I mean I genuinely considered leaving the theatre. The majority of the blame goes to director Mel Gibson and composer Rupert Gregson-Williams. They stuff the film with scenes that are borderline cringe-worthy, in fact some of them go way over that border. It would seem they got directing and composing tips by watching endless hours of Disney Original movies and taking notes; much like football coaches do before a big game. I say this because some scenes in Hacksaw Ridge would only be deemed acceptable if they were to appear in a Disney film. Take Doss’s first real kiss with Dorothy for example. It happens on a mountain top against a sunny Sound Of Music style backdrop. As if this wasn’t enough, Dorothy’s hair dramatically blows in the wind as a Disney- esque string score plays in the background. 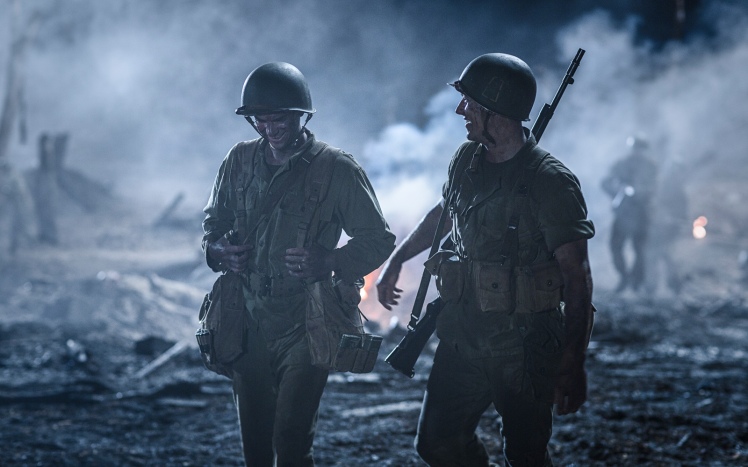 Andrew Garfield is exemplary. With a happy boyish grin stuck to his face and a flawless southern drawl, his portrayal of Desmond Doss is Oscar worthy. His performance doesn’t falter- aside from the time he questions his faith on top of a mountain. We just can pretend that didn’t happen. He really shines through during the film’s second half which takes place on the Okinawa battle-field. Doss runs around unarmed, saving lives left, right and centre, proving he’s much more useful than a chocolate teapot to his fellow comrades. It’s in the second half that Mel Gibson does a complete 180°; thankfully in the right direction. He doesn’t hold back on the battle scenes and shows them in all their bloody goriness. Soldiers get shot halfway through a sentence. Rats feast on the flesh of the dead. We’re brought uncomfortably close to the violence and we love Mel Gibson for it. It’s here that the film comes alive. It’s an unforgettable 70 minutes that leaves you wanting more. If it hasn’t been already, Mel Gibson’s depiction of the Battle of Okinawa will be regarded as one of the best battle scenes of all time.

HACKSAW RIDGE IS OUT IN CINEMAS NOW